Jerome R. Corsi, a Harvard Ph.D., is a WND senior staff reporter. He has authored many books, including No. 1 N.Y. Times best-sellers "The Obama Nation" and "Unfit for Command." Corsi's latest book is "Who Really Killed Kennedy?"

NEW YORK - Since the passage of Obamacare, House Speaker John Boehner has been dogged by critics pointing out his investment portfolio has benefited from owning insurance and medical company stocks that have profited from the legislation.

An analysis of Boehner's current investment holdings includes a number of stocks benefiting from Obamacare in a total portfolio estimated at between $3.5 and $5 million in current market value.

Among Boehner's current holdings are: 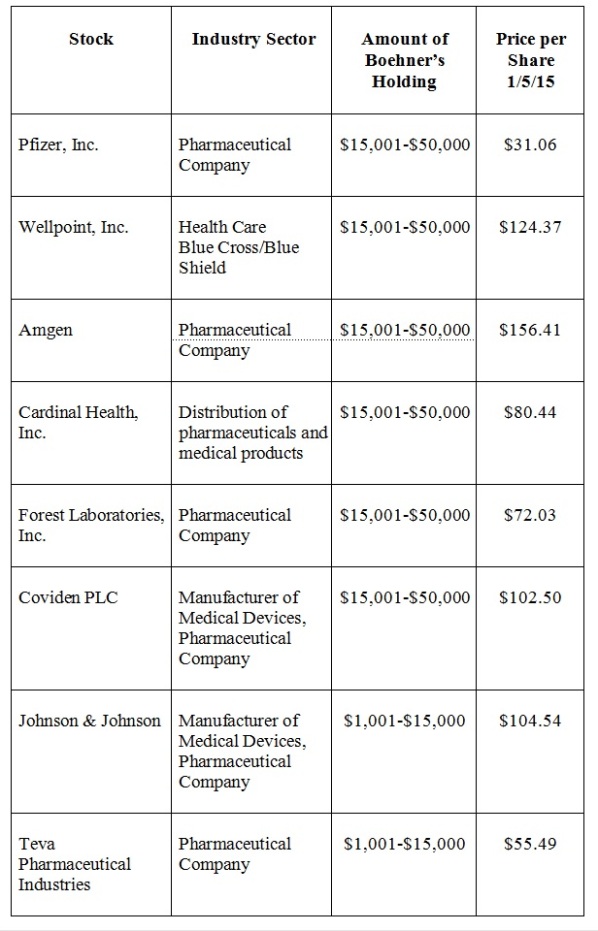 Boehner's Obamacare-related investments trace back to 2009, when the Obama administration was pushing the Affordable Health Care Act through Congress.

Peter Schweizer, in his 2011 book on Washington corruption, "Throw Them All Out: How Politicians and Their Friends Get Rich Off Insider Stock Tips, Land Deals, and Cronyism that Would Send the Rest of Us to Prison," noted on Page 20: "Congressman John Boehner, who was leading the opposition to Obamacare in the House of Representatives, may have been fighting John Kerry on policy matters, but he was entirely allied with him when it came to investment decisions."

Schweitzer drew a causal link, noting that Boehner's heavy investment in Obamacare stocks meant his political opposition to the legislation was undermined by his personal interest.

Health insurers breathed a sigh of relief. So too did pharmaceutical companies, who feared that a government health insurance program would lead to price controls. When Boehner bought Wellpoint stock on December 10, the price was about $56 a share. Within a month it was trading at $66 a share. Cardinal Health was up approximately 10 percent by the time President Obama signed the health care bill. In early 2010, Boehner bought yet more shares in Cardinal Health and Pfizer, before President Obama signed the health care bill.

WND's Joseph Farah is championing the grass-roots "Don't Be Yellow: Dump Boehner Now!" campaign, which has already sent some 560,000 letters to House Republicans attempting to mobilize the palace coup.

After public uproar over members of Congress being allowed to buy and sell investments based on insider information - a violation that could constitute criminal activity if done by members of the public - Congress passed the Stop Trading on Congressional Knowledge (STOCK) Act, which was signed into law by President Obama April 4, 2012.

Quietly, Congress passed and President Obama signed in April 2013 a new bill that indefinitely suspended the filing requirements of the STOCK Act for 28,000 executive-branch employees. The exemptions included senior executive service members working on the staff for members of the House and Senate. The bill opened up a back door to congressional staffers to engage once again in investment activities that for public investors would be grounds for possible criminal violations.

Prior to the passage of the STOCK Act, members of the House and Senate were exempt from SEC regulations on insider trading, allowing them to trade freely on privileged information obtained while conducting their official congressional activities.

Boehner has consistently maintained his investments are held in a blind trust and that he does not personally make investment decisions in his own investment portfolio. But few experienced congressional critics believe Boehner and other members of Congress are unaware of their investment holdings, because public disclosure requirements demand yearly filings of all investments.